Tobyboo has had a break the last couple of weeks, the 3 of us have just come back from an amazing trip round California. We landed in L.A. and was taken on a brief tour to the Hollywood stars of fame malarky and Chinese theatre by my cousin. Most handprints meant nothing to Toby... then he found Emma Watson.

We only had 2 nights in L.A. and spent the second of it in Hogsmede - well The Wizarding World of Harry Potter at Universal Studios. When we went to park and was told that only northern American disabled people counted as disabled (?) they really need to sort out their accessibility.

If you do have a disability then Universal Studios really isn't the place for you - the rides are much more aggressive than somewhere like Disneyland. I was looking forward to going on 'Harry Potter and the Forbidden Journey' and should have known from the seating that I wasn't exactly going to enjoy it - strapped in 'Robo-coaster' chair most of it was swung about horizontally, I was so scared my eyes were shut so I didn't see the film! I wish they had a more accessible version.

Rides like the Minions one, that I thought would be quite general ended up in being aggressive too! (that one was fun though) 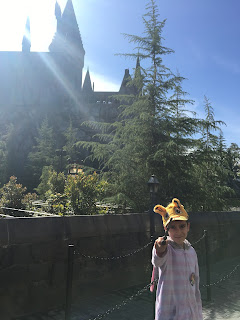 After the L.A. heat and sun we drove to Sequoia National Park and to 5ft snow. Staying at the Wuksachi Lodge which was welcoming and as Toby says "very nice" 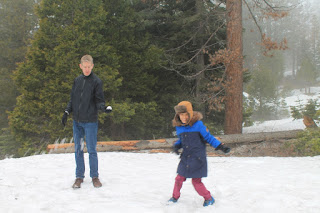 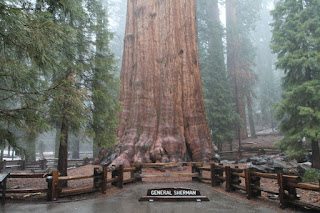 The following day we walked though torrential rain, Toby managed to get this shot of General Sherman - the biggest tree in the world! (in volume, says Toby) only staying one night we then moved on to the home of Apple screen savers, Yosemite National Park. 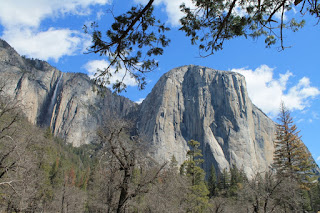 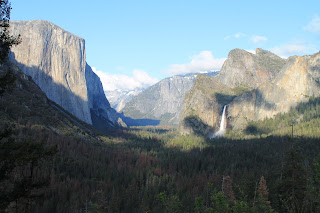 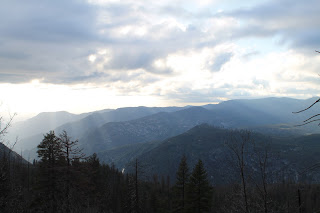 Yosemite didn't disappoint at all - the only thing I can say is the hotel we stayed in had so much to do it was hard to leave. Tanya Lodge had lots of activities from night time hikes to archery, the hotel itself had 2 pools and in the evening a games room that showed films so if you go with kids be warned they might kick up a fuss going out! 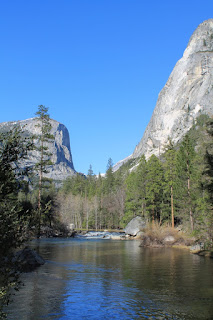 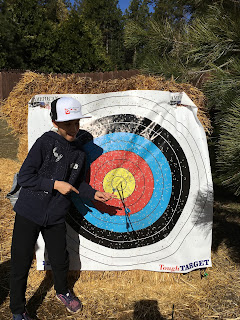 Yes Toby did get a couple of bulleyes - no Bully Bull but a hat prize! 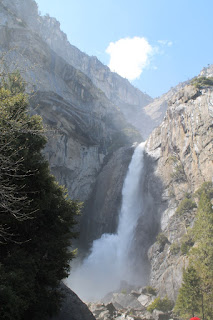 After a wonderful 3 night stay we were in the car again heading to San Francisco. I couldn't wait to go there and the place completely lived up to the hype. From the moment you head in you get such a feel of the place - with only 3 nights we sadly didn't get to see much of it at all but who knows maybe in 10 years time we might get to go again (our last big holiday was 10 years ago - in fact our only big holiday was 10 years ago). 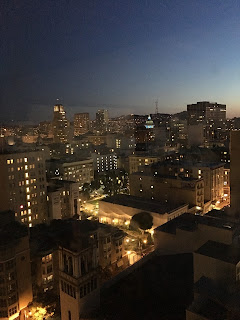 View from the hotel - Hilton on Union Square 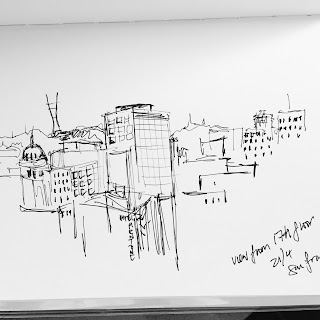 did get me sketching 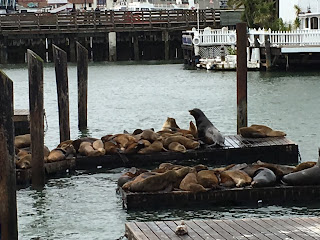 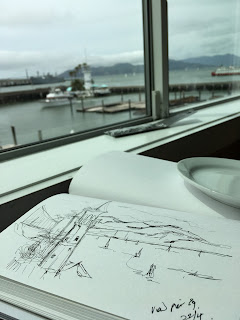 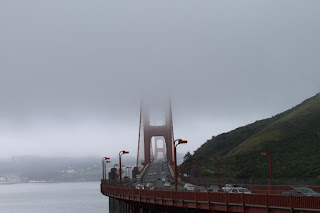 Waving bye bye to the bridge we were on the road again - this time heading down the coast to Carmel. A beautiful spot - again only one night here but it was enough. 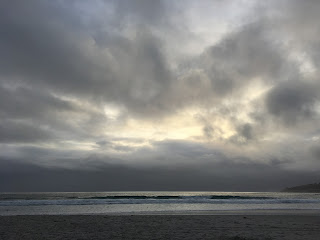 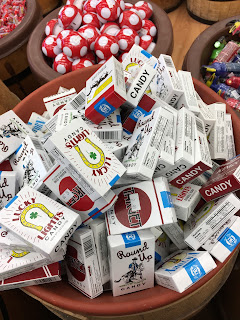 Heading south we stopped at Monterey - Kinder eggs are illegal in the States and yet sweet cigarettes aren't .... go figure. 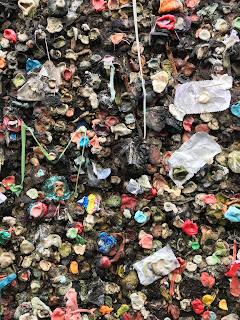 Bubblegum Alley - yes an alley whose walls are covered in bubble gum. 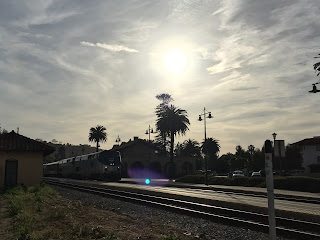 Next stop - Santa Barbara. Yes, more beautiful coastline, sea otters (only saw heads bobbing and didn't have the camera handy) only one night here and then back in on the road - just not the coastal one because it was shut which meant we didn't get to do the Big Sur. 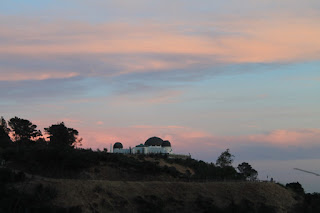 Back where we started - one last night in L.A. this time seeing what we were really after - a trip to Griffiths Park and the observatory - Toby was in his element - an observatory that was also in La La Land (the boy loves the film) which lead us to our final days visit - Warner Brothers Studio Tour. 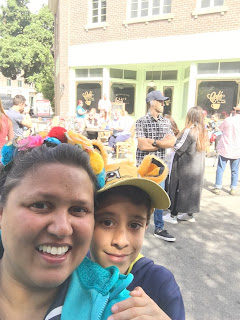 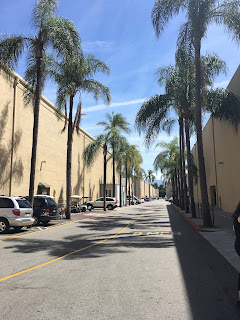 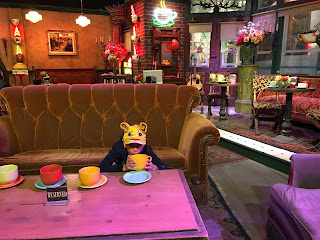 He'll be there for you - on the set of Friends

This was expensive which is why only Toby and I went, but so worth it - it's a 3 hour tour on a small open tour bus. You don't know what your going to get because in small groups your guide almost tailors it to you - she got a 'yay' on the mention of Gilmore Girls and no reaction on 'The Big Bang Theory' which meant she showed us more of Stars Hollow. Being a working studio, you don't know what or who you'll see but you do get to get out of the buses and walk around - get shown on a set (not while filming is going on) and see the pre production side too. 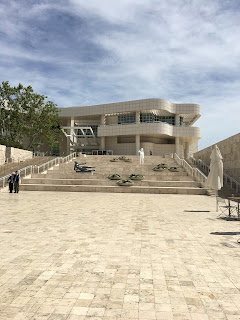 Meeting up with Dave after we went on to see the Getty Museum - this place needs 2 days not 2 hours, just an incredible collection. 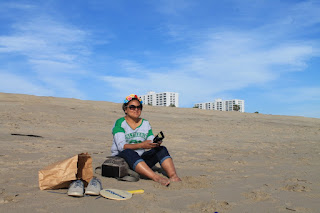 On the way back to the airport we stopped at Santa Monica, a play on the beach and then headed on the flight home.

We booked through Virgin Holidays - who did do us a great deal if we'd have booked the hotels independently there's no way we would have got the deals they got for us so I would recommend. Looking back, I wish we did San Francisco to San Francisco rather than L.A.  but I've got a feeling that it was cheaper doing that way - SF really does deserve about 4 days minimum. If you go to the National Parks with kids, make sure you do the junior ranger - in the information centres, sign up for an activity sheet when they complete it and hand it in theres a scout like ceremony and they get a badge - and yes its free.

If you have younger kids or any aches and pains I wouldn't recommend Universal at all - I came out in agony. If you are a blue badge holder, hopefully the parking might now be changed as they were shocked that the staff only counted Americans and Canadians as disabled and promised this would be corrected but do bear in minds that the rides aren't really geared up for wheelchair users.

I'd defiantly recommend the Warner Brother Studio Tour, don't expect it to be like its sister in Leavesdon (Harry Potter Studio Tour) but they do try and milk HP and have lots of exhibits even though none of it was filmed there. Toby didn't know any of the programmes or films they were talking about but though it was fantastic just seeing a glimpse of Hollywood film making.

We had car hire throughout expect in San Fran, where we used buses, street cars and yes did queue for an hour for a cable car (and you will have to queue).

I'd so recommend a trip like this if you've been thinking about it - yes it will take us ages to pay off (hotels, flights and car hire through Virgin Holidays approximately £4500) the credit card but in a couple of years time the boy won't be that happy about coming on a trip with us, this is a priceless memory for all 3 of us.