Better with the Threads Uncut 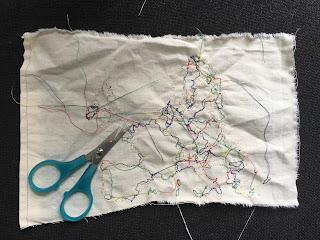 I'm thick, never claimed not to be thick and have no problem being it, but after hearing some people on youtube I feel like a ruddy genius.

The depressing thing about the referendum is that it never should have happened - why would you ask people like me a question that involves the global economy? don't do it because all each person will do is scale it to what our tiny brains can take which isn't much how on earth is your average person mean to think 'exiting the EU' without half following what friends have said or going with what the local people around them have said influencing them? Just a thought but I don't know anything about economics but I do know that we have one world and the general idea of actually getting on with other countries I thought was priority apparently not.

It was obvious what would happen if there was a 'leave' win, obvious - and I'm the stupid one remember. The pound would drop, businesses that deal with the rest of Europe will have to relocate or at least have mammoth changes (so thats most of the centre of London then), arts and culture would suffer because no one over here cares and everything arts/culture based seems to be EU funded, same with science goes without saying.... security - why on earth is your ex going to help you? all I knew of the EU was common sense, they've put things in place to help us and sometimes it might mean compromising but on a larger scale I'd like to be part of that room in the party not crying alone in the toilet. If I heard anyone utter the word immigration my brain switched off. I'm not saying it's not an issue but we should be looking to help anyone that needs help. My parents came in the 60's, my mum had a job to come to so they see it as invited as a result my dad has turned into Alf Garnett. What happens when something happens here and we need help and we need somewhere to go? does everyone just think this tiny island is immune?

If immigration was your one point that you looked at, did you not think without EUs help there could be a chance that they might say 'sod these controls' we're just looking after our own borders? We're in a mess at the moment; forget the big stuff I don't understand the small stuff that effects people like me. The fact that I'm scared to go out now because I've heard the 'p' word that I've not heard in a while used,  people are describing children as vermin and vermin are screaming at people to 'go back' and no ones treating humans as other humans. No one seemed to think maybe the EU has rules and regulations in place to help. The fact is the world was a better place a a week ago. It's been a week and already look whats happened - I keep thinking I'm watching clips of 'This is England' on Facebook. Oh and just incase anyone cannot see the link the last time I heard someone get called the 'p' word for being brown was when UKIP were gaining support. The 'Leave' has given the green light for anyone insecure to blame whatever they want on not just anyone from Europe but anyone they think is an outsider - which to them boils down as colour. As far as they are concerned the majority is with them and they never felt so powerful.

This country used to be a collective of the world it colonised and the mix that that then evolved made it a great country. I don't know what utopia some had in mind, from the mindless reactions of some recently it's clear their utopia is.

It's sad that we've got a playground and some kids thought it would be better for everyone if they just stayed in the corner and didn't mix with the other kids because in school the only person that misses out is that kid that things it doesn't need friends that everyone gives up on in the end. But I am thick so what do I know.